Snakebite menace: Understanding the true burden on the society 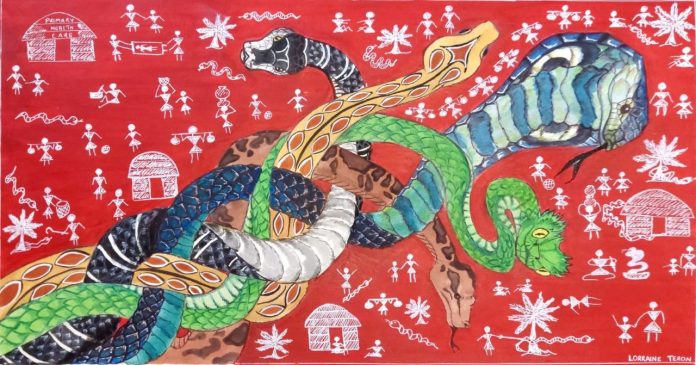 Snakes and India, PC: Conceptualization by Ashish Bihani and execution by Lorraine Teron

India registers roughly half of snakebites, and the highest number of related deaths is recorded worldwide. Prevailing cultural practices of worshiping snakes as well as because of being an agrarian economy makes rural India highly prone to snakebites. Despite this, there is not much discussion in public spaces on fighting the menace in the country.

India records 60,000 annual deaths due to snakebites. It has 60 venomous snakes, and the most popular of them are Spectacled Cobra, Common Krait, Russell’s viper, and Saw-scaled viper. Together, they are called the Big Four and cause 80% of the deaths. The bite of highly venomous snakes can inflict clotting disorders, paralysis, tissue necrosis, cerebral hemorrhage, and in the worst case, an extremely painful death. It can also leave the surviving victims with lifelong physical disabilities endangering the livelihood of the family.

The high snakebite-related death and disability rates are largely due to delays in accessing treatment measures, lack of awareness, and wrong beliefs. Practices like sucking out the venom from the bite sites and the use of black stone to combat venom effects by faith healers are tried before taking the victim to healthcare services. A fraction of the snakebites is dry bites where snakes strike without actually injecting the venom causing no adverse effects on the victim. And hence, faith healers and their remedies appear successful. But in the case of envenomation, where venom is injected into the victim’s body these practices fail and delay the right course of treatment. In a community-based study on faith healers, researchers reported around 70% of snakebite victims visited faith healers before hospitalization in eastern India.

The only scientifically validated treatment available for a snake envenomation is the polyvalent antivenom. The polyvalent antivenom is made against the venom cocktail of the Big Four . It can neutralize the venom, that is, it binds to the venom and stop its activity. It is produced by immunizing the horses by injecting a small dose of venom cocktail, lower than what causes lethality. This triggers the horses’ immune systems to produce antibodies against the venom. Once a desired immune response is generated, antibodies are purified from the blood and, processed, followed by stringent quality testing in mice. The mice are injected with lethal concentrations of venom. The antivenom concentration where 50% of the test animals survive the lethal dose of venom from Big Fours is taken as the effective dose of the product. This dose is indicative of the antivenom’s ability to neutralize the venom and relieve the clinical symptoms.

India is one of the leading producers of antivenom but there are many shortcomings.

Access to antivenom and other healthcare services is not equal for everyone in the country. 94% of snakebite deaths happen in rural areas. But the Primary Healthcare Centres in rural India are ill-equipped. They are mostly managed by one physician, untrained to treat snakebites. They lack Intensive Care Units (ICUs) and artificial life support systems required in severe envenomation cases. The majority of the PHCs are under-stocked for antivenom. So, most of the victims are taken to district hospitals after giving the first dose of 5-10 vials of antivenom.

Treatment of a single bite consumes on an average 20-35 vials of antivenom, and in certain cases goes up to 70 vials. The dose varies depending on the severity of the symptoms, a function of the amount of venom injected, and delay in treatment.  As per WHO records, India reports ~2.7million envenoming cases annually. Approximately 20 lakh vials of antivenom are produced annually, which makes up for just 4% of the total requirement.

The efficiency of antivenom used across the country to neutralize venom has also been constantly questioned. 80% of the venom to manufacture antivenom is sourced from Irula co-operative society in Tamil Nadu. But snake venom is known to vary because of the diverse range of prey they find in different habitats as well as due to certain environmental factors. Venom collected from the Big Four from different locations of India shows different compositions. It is, hence, arguable if antivenom made against the venom of snakes of just one region, will be equally effective across the country. The high number of vials required for treating the bites hints at their poor efficacy, and emphasizes the need to develop improved therapeutics.

How can these shortcomings be mitigated?

Most snakebite-related deaths are preventable if the antivenom treatment is given within 2-3 hours. It is also important to remember that antivenom cannot reverse the damage already wreaked by the venom; it can only stop further damage. So, it is crucial to empower and engage communities in debunking myths, creating awareness of scientific treatments, and strengthening the Primary Healthcare Centres. The most affected communities need to understand the value of getting antivenom treatment as early as they can.

India needs data on the true snakebite burden to improve treatment accessibility and distribution of antivenom in conflict-prone locations. Poor data on the number and type of snakebites have led to difficulty in estimating needs, and inadequate distribution policies. The hospital-based data reveals probably only a fraction of the actual burden because, in reality, many victims never reach healthcare facilities. Epidemiological studies need to be conducted on district levels throughout the country to record the true burden of snakebites and offer better treatment accessibility.

Not just logistically, the efficiency of antivenom also needs to improve. India needs to develop a pan-specific antivenom that will take care of regional variations in venom. It requires states to take initiative in developing venom collection centers that can support antivenom production.

In addition to geographical variation, it is also necessary to focus on 56 other venomous snakes beyond the Big Four. They are neglected because of their limited distribution. The patients bitten by these so-called non-spectrum snakes are at high risk as the antivenom shows very poor neutralization of the venom components. It is important to identify and include the non-spectrum medically important species in the antivenom production for better treatment against species with limited distribution.

Following the WHO’s aim to halve the number of death and disability cases due to snakebites by 2030, many researchers are trying various alternative methods to improve the effectiveness of antivenom. Extracts from many plants have been explored to be used as a supplementary treatment but unfortunately, nothing has reached the industrial scale yet. But with the advancement in technology, we have an improved understanding of venom composition and many researchers are trying to develop advanced antivenom therapies. These include modern ways to develop antibodies using irradiated venoms, production of humanized antibodies against venoms, and producing a synthetic venom cocktail consisting of highly toxic venom components to produce targeted antibodies.

It is high time to address snakebite deaths and disability in India. And, creating awareness, addressing the gaps in accessibility, availability and effectiveness of treatment paves the way to go.

Previous articleThe next frontier of human-relevant drug discovery
Next articleStem Cell Research: Where do we stand in the global scenario?

Avni Blotra
Avni Blotra is a PhD student at CCMB-LaCONES with Dr. Karthikeyan Vasudevan’s group. She is interested in decoding the venom gland transcriptome of saw scaled viper to create a complete catalogue of toxins expressed in the venom. She is also trying to understand the effectiveness of antivenom against the saw scaled viper’s venom. She can be reached at avniblotra76@gmail.com